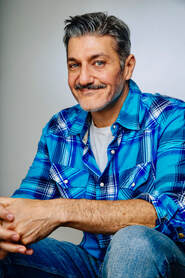 ​Born and raised in Boston's North End, P.J. Marino is an actor/writer who has appeared in over 100 TV shows, films, and commercials. Some of his favorite gigs include his recurring role as "Detective Marino" on Chris Rock's Everybody Hates Chris, and burnt out video game character "Luigi" on MTV Networks' Video Game Reunion. He recently appeared on NCIS: LA, played Vince Lombardi for FOX's NFL 100 (narrated by Denis Leary), and proudly guest starred in the season 2 finale of HBO's Barry, directed by and starring Bill Hader. Up next, he will be seen starring in the mystery/drama Captain Tsunami's Army, based on his script. He currently lives in Los Angeles with his lovely wife, actress Tessa Munro, and their two beautiful boys.